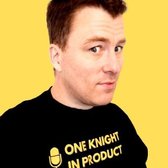 Share this post
Mental Health for PMs, the Importance of Messaging, Web3, and thinking about Revenue Debt
oneknightinproduct.substack.com

Mental Health for PMs, the Importance of Messaging, Web3, and thinking about Revenue Debt

It's been all go here at One Knight Towers so I sadly missed a week of the newsletter. But here's a bumper selection of stuff to make up for it!

A word from the sponsor - Product People

If you’re a company founder or product leader who needs to get a product management team up and running quickly or cover parental leave check out Product People. They’ve got a thriving community and 40 in-house product managers, product ops pros, and product leaders. They onboard fast, align teams and deliver outcomes. Check out Product People to book a free intro chat and quote code OKIP to get a 5% discount.

I've released three One Knight in Product episodes since the last newsletter, so here's one key takeaway from each:

Product Management is tough, and it's also lonely

Product management can be great, but it's also a tough role due to being at the centre of everything, with nowhere to hide & you're often an easy target for blame. PMs often lack people to tell them what's OK & what's not.

Messaging is based on some of the fundamentals of the company, including its mission, vision & strategy. It needs deep leadership involvement as well as a cross-functional group from around the company

It's mass adoption or bust now

There's a lot of work going on to bring a proper consumer-grade experience to Web3 apps, which has been lacking but is getting better. There is also work going on to make people feel secure and that they won't lose all their money to hacks.

"Strong Conflict Resolution Skills are a Must"

I saw a job ad recently that had a specific bullet point asking for "Strong conflict resolution skills". I was kind of gobsmacked. Not because people don't need to be able to deal with conflict, but because it implied that conflict was top of their minds. So I ran a poll to see what other people thought.

The results (and some of the replies) were not surprising to me. Personally, I'd have reservations about applying to this place, but if you made me then I'd be sure to ask some probing questions to try to dig into how the company works. There's nothing wrong with healthy conflict (turning rocks into shiny stones and all that), but if you spot signs of unhealthy conflict I'd run for the hills!

Here are a couple of shout-outs to John Cutler and Jackie Bavaro for a couple of posts I really liked.

John Cutler @johncutlefish
Why do so many B2B products have terrible UX? Even with teams that care about UX? (beyond the buyer/user dichotomy, etc.)
11:59 PM ∙ Oct 23, 2022
706Likes81Retweets

Jackie Bavaro @jackiebo
Senior PMs need to shine on the "Tell me about a time when..." questions. I just wrote about my PEARL framework to show off your seniority here:
jackiebavaro.substack.comUse PEARL instead of STAR to shine in your PM interviewsHighlight your seniority with the PEARL framework for talking about your experiences
11:52 PM ∙ Oct 23, 2022
332Likes36Retweets

There are lots of different types of debt: Technical Debt, Vision Debt, Organisational Debt, and Decision Debt to name a few. I was thinking recently about the fact that many of these things can be caused by one thing: Chasing the wrong type of revenue.

We've all heard, or lived, the stories of the company leadership who see every and any revenue opportunity as a good thing. There's no custom request that's too unreasonable for them. Companies with weak product/market fit but healthy industry expertise and a good founder Rolodex see everyone as an opportunity. The product isn't good enough to stand on its own, so the only way forward is to go wide and get revenue from wherever you can, no matter the lack of a good fit.

B2B startups often struggle with revenue distribution. It's really easy to find yourself in a situation where the vast majority of your revenue comes from a very small number of very large customers. This looks great to the commercial teams and leadership, at least to start with because big logos look great on the website, the contracts are big and all ARR is good ARR.

What tends to happen here is that the product becomes a hodgepodge of whatever features and capabilities were either seen as obviously needed (due to industry expertise or "competitors are doing it so we have to") or directly requested by big prospects to win the deal. It's hard for commercial teams to turn any of this down because no one else has any better ideas. And, to be fair, I have a lot of sympathy for sales teams in a scenario where the company has accidentally fallen on semi-product/market fit, with a product that kind of does some things that people want but not quite well enough.

Fast-forward a couple of years and you have the aforementioned hodgepodge but also you have a chunk of revenue tied up in that hodgepodge. You've no doubt got a scattergun set of customers that share few characteristics with each other because the sales team sold to whoever they could get any kind of interest from. Growth has started to slow down because the Rolodex is running low, and you don't have an offer that's really compelling to anyone. Competitors will creep up behind you. Sales become harder, and renewals more challenging.

Maybe there was a product team before, or maybe the founders have spun one up since, but the product team is often fighting with both hands behind its back. Why? Because there's so much historic revenue tied up in the hodgepodge that it's impossible to stop doing anything without risking some of the revenue that really wants you to keep doing that thing.

That random handful of customers that really needs that one feature? That's 15% of our revenue, we can't stop supporting that even though it's not really what we want our platform to do, costs as much to maintain as we make from it, and no one else needs it. Want to focus your ICP a little more or tighten up your positioning? We can't do that because we've got to support 35% of our revenue from all these niche markets that we can't really support well but they add up.

So what to do?

Well, in some cases, you have to just realise the game you're playing, accept it and do the best you can. Some companies are set up in such a way that you'll always be living in this quasi-services company world. And, to be fair, there's no one right way to build a company. If you enjoy building software and not having coherent plans then I'm sure it's exciting.

In some cases, there's a desire (or need) from the leadership to change this. Maybe they realise that randomising the roadmap and saying yes to everything is ultimately a barrier to scale, but they don't know how to change that. The problem in this situation is that you've still got the Revenue Debt... you're going to have to persuade people that saying goodbye to some revenue is OK. You're going to need to have a really solid growth plan to show them what's going to replace it.

Or maybe, hopefully, you're able to make the necessary changes early enough that the impact is limited. My strong hunch is that all growth feels like good growth early on and that it's very difficult to persuade founders that the party is time-limited during the good times.

Some things that I think can help, if the appetite is there:

In B2B, sales cycles can be months long. There is no excuse for surprises. The sales team is validating early, doing their own discovery, and should have receipts. There's no excuse for a last-minute lynchpin requirement coming out of nowhere. Have regular meetings with the sales team to understand what's coming down the pipe and be able to flag concerns early.

So many companies have a company strategy that is basically just "speak to whoever we can and make a bunch of money so we can exit". That's cool and all, but it's not something to get excited about and difficult to rally behind. It also doesn't help you make any decisions at all. You can't have a product vision without a company vision (although they could be the same). Work as a team to reset your purpose and how you want to get there. If you can't do this, you're back to "quasi-services".

When your ICP is "anyone we can talk to" you're automatically going to get dragged into just about any conversation. But it's not just the sales team's fault here. The commercial and product teams need to join forces to identify who the best-fit customers are and the size of the market. You want to pitch at the smallest possible segment that supports your revenue goals. You can sell to people outside that segment if they come up, but you shouldn't target them outbound, and under no circumstances should you build random stuff for them.

Sales teams need good information about what the product does and doesn't do, and who it is and isn't for. Get the message right, lay out the actual value of your product, and try to get salespeople to sell benefits, not features. Make sure you have primed them with answers to common questions and deflections for competitor comparisons. Let them own the conversation.

It's really, really common for sales teams and product teams to be disconnected. Product teams are often considered internal-facing teams, message handlers, or "not commercially-minded". These are often fair comments but as product people, we have the ability to break the mould. Keep close to your commercial teams!

This stuff is hard, and it's clear that it won't work in all companies. Do your best! And sometimes even small improvements can make everyone's life better.

That's it for this week, thanks for reading and if you liked this newsletter, please share it!

Share this post
Mental Health for PMs, the Importance of Messaging, Web3, and thinking about Revenue Debt
oneknightinproduct.substack.com
Comments